Overview of Adrenaline bot interface and its capabilities

There is also a video version for this manual.

So, first of all, what is an Adrenaline bot? This is a program that allows you to automate in-game actions in the game Lineage 2. With the help of the Adrenaline bot, you can control a whole full party at once, or even a large number of characters. Behavior is configured through the interface and scripts.

The interface is a familiar window for many with various settings, where you can set up attacking skills, buff, healing, and so on.

Scripts are arbitrary scripts written in the Delphi programming language that allow you to control the character as you want.

Let's first examine the main window of the Adrenaline bot. 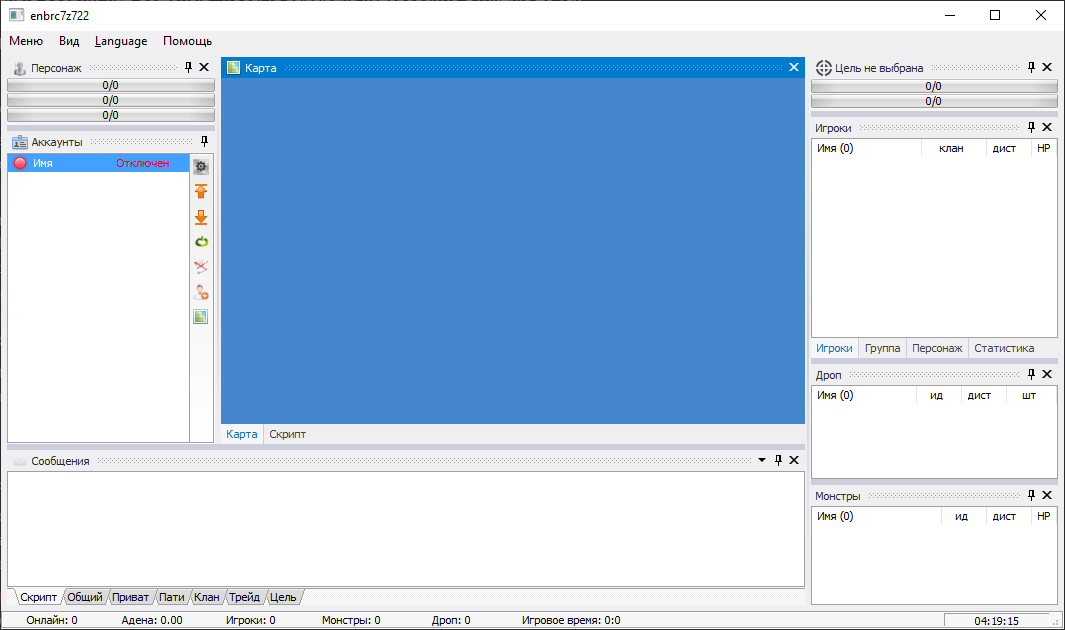 On the left, we see the account manager - this is a list of running windows that are controlled by the bot. Essentially, this list is the foundational control. If we select any account, all other interface elements will start displaying information associated with this particular account. For example, information about the HP / MP of our character and the his selected target.

Below we see the list of messages - there are several tabs here. By default, a tab is open where the logs of running scripts are displayed, but we can also see here in-game chats and even some information about our target: stats, equipment and buffs.

Let's move on to the map - it is needed so that we can understand where the character is, even if the game window is minimized and see his environment: monsters / players / drop. If you see a blue screen instead of a map, make sure that you downloaded the maps by the updater and turned on displaying of the map in the bot. You can also use it to draw combat zones where your bot will farm. To draw a zone, you need to right-click on it and activate the "edit zone" function, then draw the zone and save it by giving it some name. Not so long ago, we added the ability to open separate windows with maps for each character - this is convenient if you need several characters to be visible at once. By the way, using these windows, you can quickly pause the bot on certain characters.

In addition, the bot displays various information about the world around it:

Next to the map is the script editor - here we can edit and run scripts and plugins. We'll talk more about scripts and the editor a little later.

The display of the listed interface elements can be turned off and on by selecting "view → panels" in the top menu and configuring what to display and what not. You can also customize the location of all elements of the bot's main window - for this you need to "grab" some element by the title and drag it wherever you want. If suddenly during such an attempt everything got out of control and you want to return everything to its original state, turn off the bot (via menu → exit, just clicking on the cross does not turn off the bot) and delete the Settings.ini file located in the Settings folder. 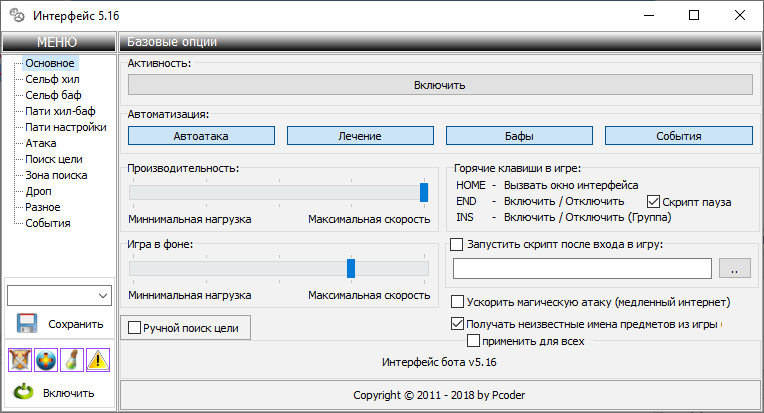 Now let's move on to an overview of the bot interface for configuring the behavior of charachers in battle. To open the interface, you need to select an account and click on the button with the gear image. An interface window will appear. The navigation menu is located on the left, below it is a drop-down list for selecting the bot config and enabling / disabling the bot functions. The config of the bot stores information about how it needs to behave in battle - what skills use to attack, what buffs to use, what mobs to kill, and so on. Each config has its own name. The config can be created both for a specific character (and, for example, named by his name), and for a group of characters of the same type (for example, you have 10 spoilers, they farm in different locations, but everyone can use the same typical config). Below are the buttons that turn on and off both certain functions of the bot and the entire bot as a whole.

We will not go into detail about all the settings pages in this video. But let's briefly articulate why all these tabs are needed. 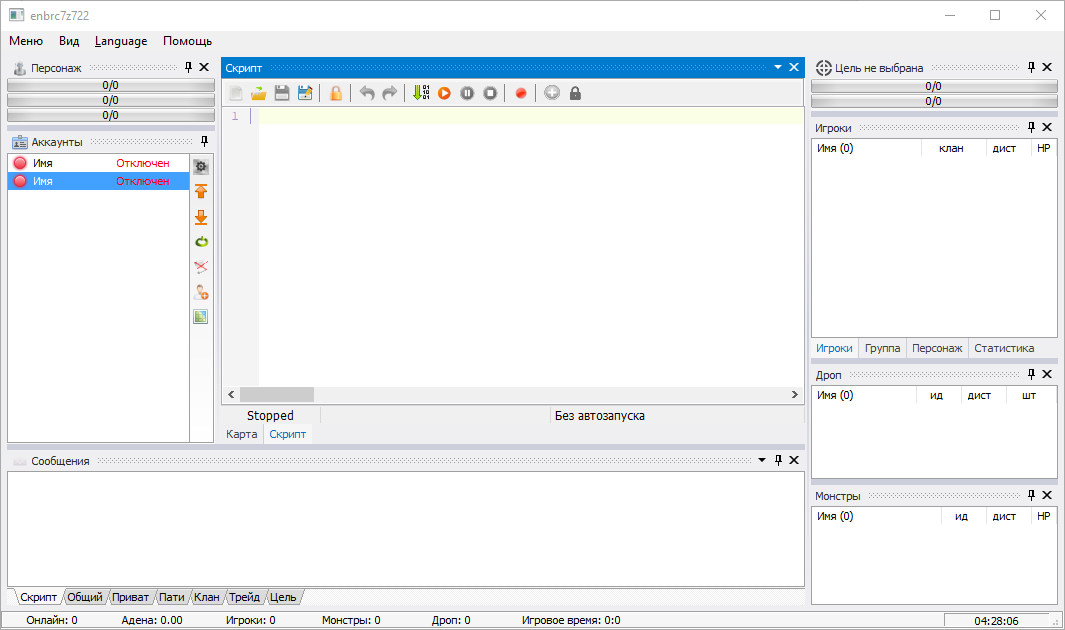 Let's return now to the script editor. With it, you can write, compile, and run your own scripts as well as those written by other people. Thanks to scripts, Adrenaline bot can automate almost any action in the game.

There are three different types of scripts:

How to start the script?

On our site there are many ready-made scripts for all occasions.

Also, the Adrenaline bot implements pathfinding algorithms, so that bots can move in the game along pre-drawn routes in just a couple of lines of code. There is a special script for editing routes - GPS Editor, and it is also presented on our website. You will find details on how to use it on the page with its description.