Support all chronicles from Interlude to Orfen / Seven Sings 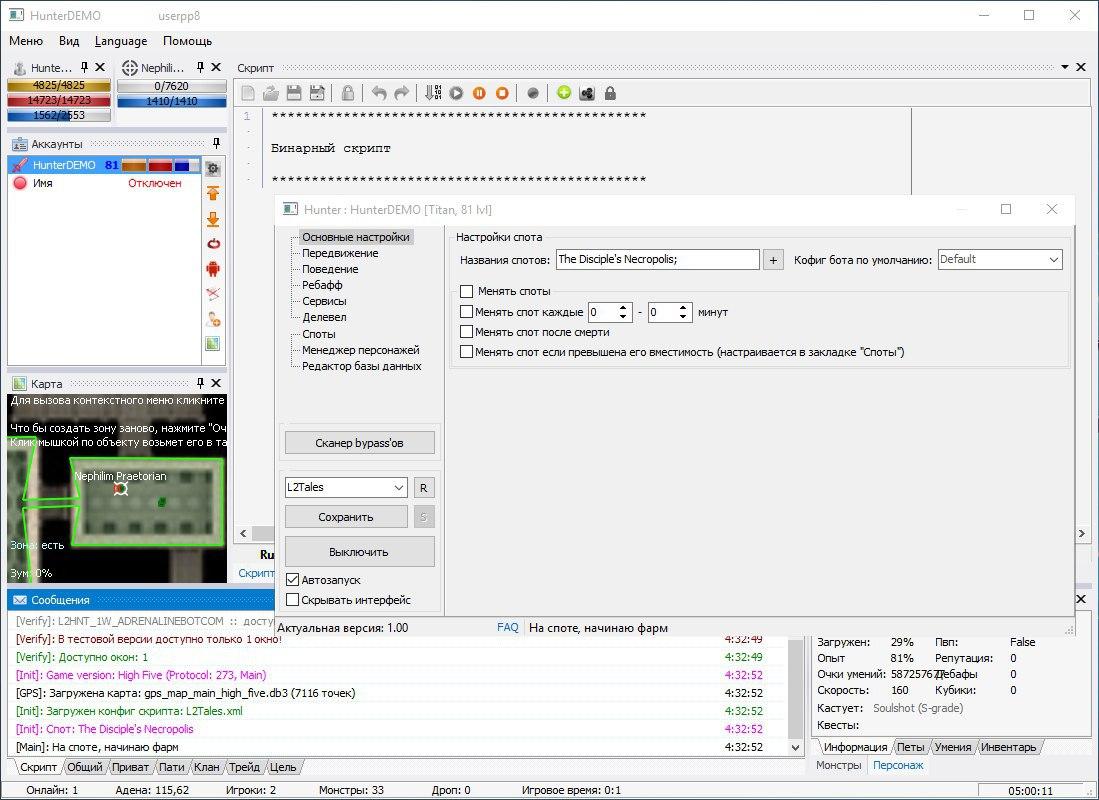 Main feature of Adrenaline Bot is powerfull script engine, that allows your to automate any actions in game. 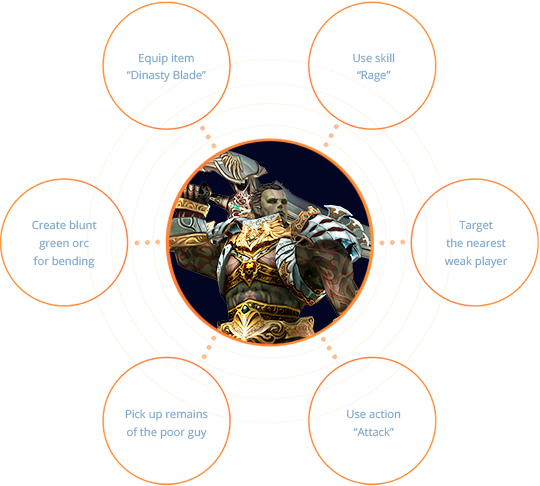 One of our experts with excellent knowledge of script engine and bot functionality is always ready to help you.

In addition to people we also have a Discord chat bot assistant based on a neural network, working 24/7, even when people are sleeping.

Tired of waiting for updates for hours? We are the only one who made this process fully automated for verified users.

Every month we're giving away free keys among our customers, and sometimes sell the keys at a discount!

After registration in your cabinet, you will get access to some services that you will not find anywhere else. And again - absolutely free!

There are several types of licenses for different servers. Be careful when choosing.
If you are using the bot for the first time, be sure to read the important information!
You also can test bot (see interface / functions only) before purchase, contact us for this.

Not for Classic servers

Not for Classic servers

Every month we draw some free keys for the Adrenaline bot. You need to register on the site and buy at least one key during the promotion period to participate (the more keys you have, the greater the chances of winning).
In addition, sometimes on this page we publish links to buy bot's keys with discount!

8 keys will be given away

Take part in the draw

Radar with a lot of PvP features. Flexible options allows you to feel dominationg on any class. Free trial period!

Below is a list of frequently asked questions. If you did not find the answer to your question, do not hesitate to contact the contacts listed below.

Adrenaline - bot for Lineage 2 with script engine, that allows you to automate game process, for example killing mobs or exping.

What your bot can do?

Adrenaline has friendly interface, so you can easy setup grind (solo\party) \ fishing \ craft \ events hanlders etc. Also bot has script engine - i.e. you can write your own scripts that can helps you with anything (for example, full-afk 1-85 exp with spots and equips changing)

What servers your bot supports?

The bot works almost everywhere, but the list of supported servers is constantly changing, so if you are using the bot for the first time, ask us about your server before purchasing. Also, please read the important information

How to start using Adrenaline Bot?

Watch our video manual and also read installation and launch of Adrenaline bot.

Is it hard to novice to start use Adrenaline?

The bot is intuitive and very easy to learn, also you can download very detailed manual for configuring the interface via updater. In addition, you can ask questions in our Discrod channel, where other bot users can help you.

How is the purchase? What payment methods are available?

Purchase occurs automatically through, i.e. You get your key immediately after payment. There are many payment methods available, including WebMoney \ Yandex.Money \ Qiwi \ Paypal \ Credit cards and so on.

Can I use one key on two PC at the same time?

At the same time - no, but the key can be rebound, i.e. You can use the key alternately on different PCs.

Do you have test version?

Such an opportunity is present, discussed individually with each. Register with us on the site, and write to the specified contacts, indicating your account on the site.

Can i get refund if bot will not work for me?

First of all, if you have any difficulties with start the bot - contact us for help! Manibek is possible, provided that the bot has not started, and you contacted us during the day (+ \ -) ​​period from the moment of purchase, and we could not help you with the launch. If you didn’t even try to solve the problem by contact us, or the bot works for you, but not in the way you imagined in your fantasies, or for other, not very adequate reasons - we can deny your request. Respect your and our time, If you are not sure about something - you can always ask about this BEFORE purchase.

What is scripts\plugins? Why they needed?

Nowtime noone will surprise with a usual interface bot, no matter how great and flexible its functionality is, you can always say "he can't do this or that." Adrenaline is a next generation Lineage 2 bot that allows you to create and use scripts. Script - is sequence of actions in a game that a bot will perform. Thus, Adrenaline allows you to do absolutely everything that comes to your head: to complete a chain of quests, change spots by the level, pass instances, and much more. You can use scripts for superiority in PvP over the enemy. A plugin is essentially the same script, only with an interface, which makes it easier to customize it (for example, NexTarget radar). Those. in fact, our bot allows you to create other bots at its base.

How to use scripts in Adrenaline Bot?

Very simple, for each account, you can set your own script \ plugin for execution.

I dont know how to write scripts, what should I do?

For a start, you can see sample scripts for Adrenaline . A detailed description of all methods can be found in the documentation .

Where can I order some custom script?

After registering in your personal account, you can order a script. Your order will be published in the chat script writers, and if you described the task well, one of them will contact you.

Script stop working although it was work fine before?

After some bot updates, the scripts may stop working. Most likely, you just need to update the script. Just contact script developer - he probably will help you.

Can I get banned for using your bot?

Formally, Adrenaline Bot is a 3rd party sofware and prohibited by the rules of most game servers, so this possibility exists and you should understand this. However, the reality is that the defense either simply cannot detect our bot.

What precautions should I know?

If the admins once banned you, they could blacklist your IP and / or HWID and either re-check the characters you started or ban them automatically. For IP spoofing, you can use the proxy in conjunction with Proxyfier.

What should I know about bot updates and server protections?

From time to time, servers can updates their protections. At this point, the bot could theoretically be vulnerable and detected. For our part, we take the necessary measures, monitor and detect such updates (usually in such cases a black window with numbers will appear when the game starts).

If you are a beginner - do not hesitate to ask in a chat whether it is safe to enter the game with a bot.

Can I run game clients with a bot and without a bot at the same time?

Absolutely not! One of the basic rules of security is that ALL game clients should be started after the bot was started, otherwise bot can be detected by the server protection. This can lead to a ban of all of the currently running or previously started characters from this PC.

Delete updater.exe before start game client, cause game protection can react on it.
Before you buy be sure to read the important information!

Any question? Feel free to ask us, we will help asap.
But please, ask your question directly, without useless messages like "hi" "here?".
Detailed description and screenshots are welcome. Appreciate my and your time.

2013 - 2020 © Adrenaline bot by pcoder All trademarks and copyrights belong to their respective owners.

Buying and using the Adrenaline bot you agree to a number of conditions:

We deliberately do not make huge text canvases with licensing agreements, then to point you to them in case of disputes. We always trying to help our users and solving problems / conflicts if they happen. But we also hope for adequate behavior on your part, remember - stupidity / rudeness / aggression does not contribute to the desire to help you.